In Hong Kong’s book industry, ‘everybody is scared’

Hong Kong used to be a place of relatively free speech in China, but that was before Xi Jinping’s crackdown. Now everybody from writers to booksellers, publishers and printers fear they will be next to ‘disappear’ 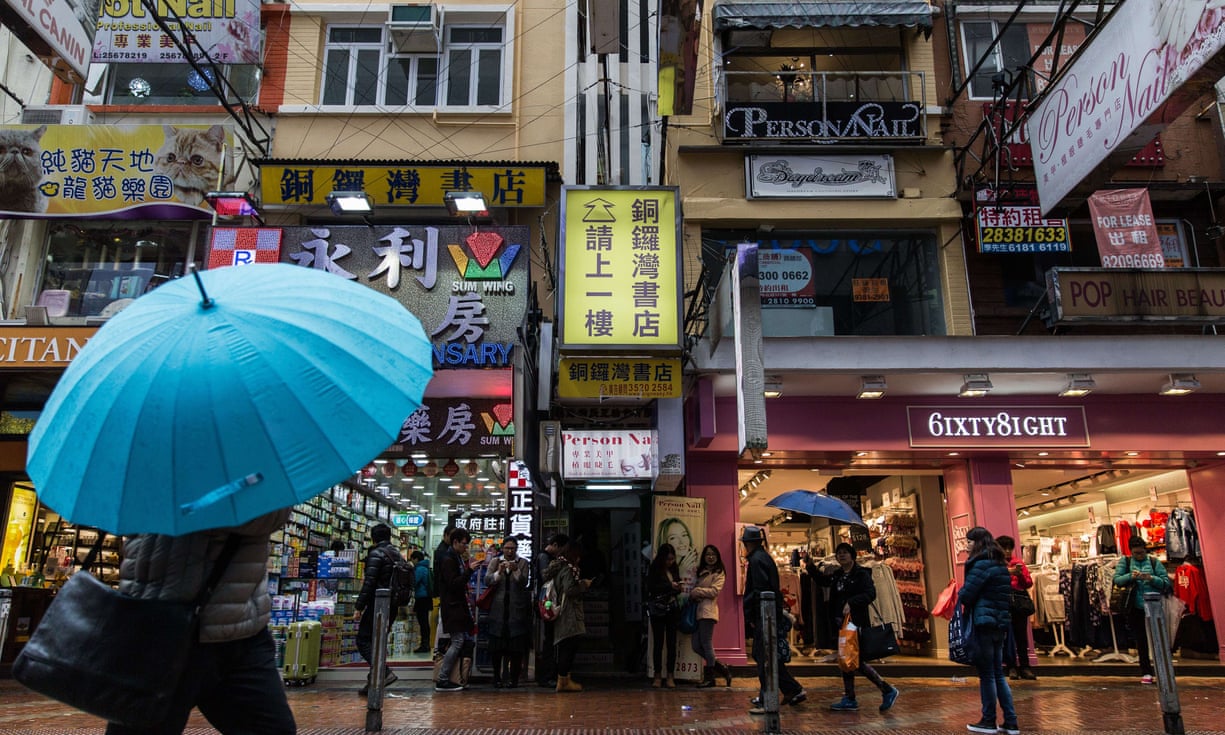 Just over a year after five publishers and booksellers disappeared from Hong Kong in mysterious circumstances, the Chinese territory’s book industry has been shaken to the core.

Bookshops have closed. Publishers have left. Authors have stopped writing. Books have been pulped. Printers are refusing political works. Translators have grown weary of being associated with certain topics. Readers have stopped buying. And the whole industry is wondering if hard-hitting books on Chinese politics still have a future in the former British colony.

The booksellers involved, formerly known only to a small niche of insiders, have now become household names in Hong Kong: Gui Minhai, a Swedish citizen, remains jailed in an undisclosed location in China after he was kidnapped from his holiday home in Thailand. Lee Bo, a British national who was lifted off the streets of Hong Kong and taken to China against his will has been released and allowed to return, but has consistently refused to give a full account of what has happened to him. He remains in China. Lui Por and Cheung Chi-ping, two clerks at Causeway Bay Books, the bookshop at the centre of the case, disappeared while on a visit to Shenzhen. They are also formally free, but live across the border where they have refused to entertain calls from the press and former associates.

The booksellers were pressured into televised confessions broadcast on national TV, in which they admitted to a variety of crimes – from a hit-and-run incident to mailing to sending Chinese clients forbidden Hong Kong books without a licence. Only Lam Wing-kee has jumped bail while on a visit to Hong Kong in June to retrieve a computer database. He has since spoken out against his ordeal, which included “isolation and psychological torture”, threats and being denied access to a lawyer. 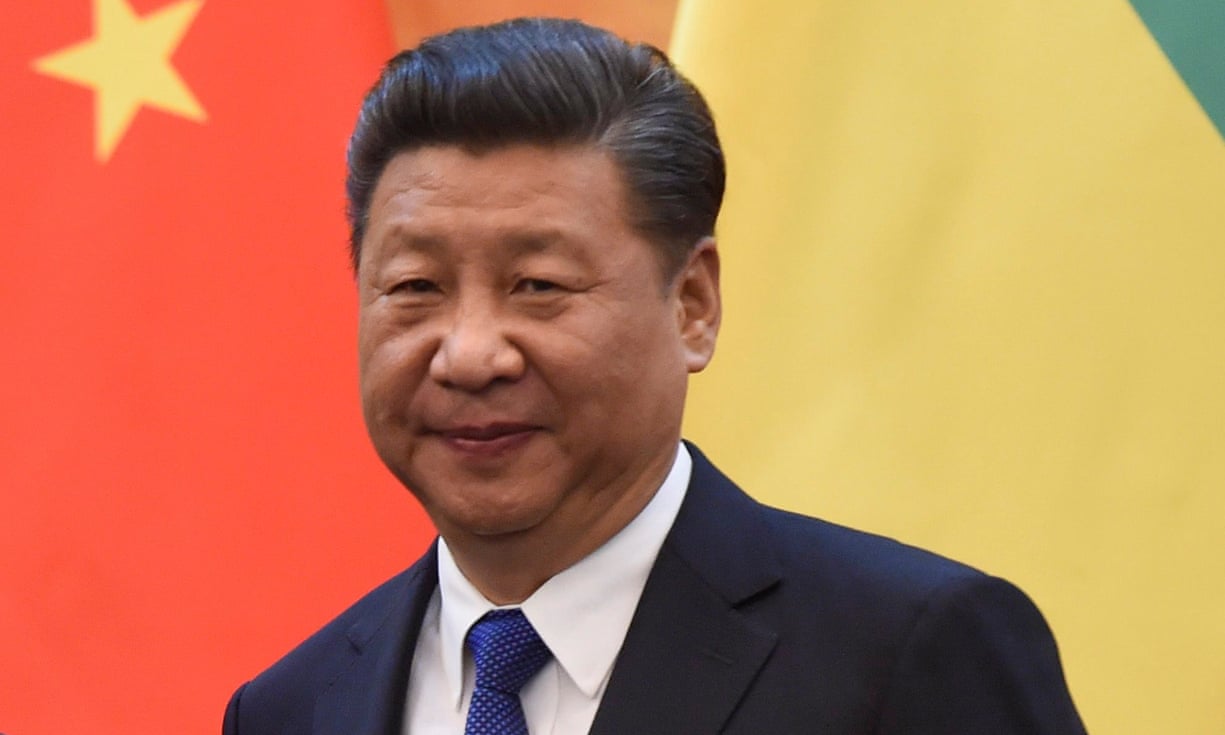 Nobody knows exactly why the authorities in China decided to crack down on Causeway Bay Books, though it is thought that the final straw is likely to have been a salacious work about China’s president Xi Jinping’s relationship with women that was about to be published.

Bao Pu, co-founder of New Century Press (a publishing house that specialises in highbrow political books), says that controls at the border with Hong Kong have been getting stricter in the past few years – “and ever more so since the establishment of the Southern Hill Project in 2010”. This refers to the code name of a campaign launched by the Chinese authorities to counter the influence of the Hong Kong publishing industry, which was seen as growing exponentially.

As more Chinese visitors had been allowed to travel to Hong Kong withoutvisas, shopping for politically revealing books forbidden in the rest of the country had become widespread. Some had been dubbed “democracy tourists” by activists who’d see them also taking part, or observing, pro-democracy demonstrations in Hong Kong.

Until the Causeway Bay case, these books were easy to buy, allowing Chinese citizens to gain a glimpse – not always truthful – of the inner workings of their opaque leaders. At the airport, in 24-hour convenience shops and in regular bookstores, political books about the Communist party, the People’s Liberation Army and individual leaders were readily available next to milk powder and traditional medicines, two of the other items particularly sought-after by Chinese tourists.

This is no longer the case. Since April, the 16 bookstores at the Hong Kong International Airport have been cut down to 10. The biggest five are now controlled by Chung Hwa Book Co, a company that was established in Shanghai in 1912 and is now under Sino United Publishing, a mainland-backed conglomerate that owns most Hong Kong bookshops – and where the “forbidden” books are mostly unavailable.

Critical, gossipy books have also disappeared from the ubiquitous 7-Eleven stores and other 24-hour mini-supermarkets. A clerk at a 7-Eleven outlet in Hollywood Road, a central street well-known to tourists for its antique shops, only says that this was a decision by the management, as the books were “still selling”. She declines to give her name, and 7-Eleven, now owned by Dairy Farm, a pan-Asian retailer part of the Jardine Matheson Group, has not replied to a written request for an interview. 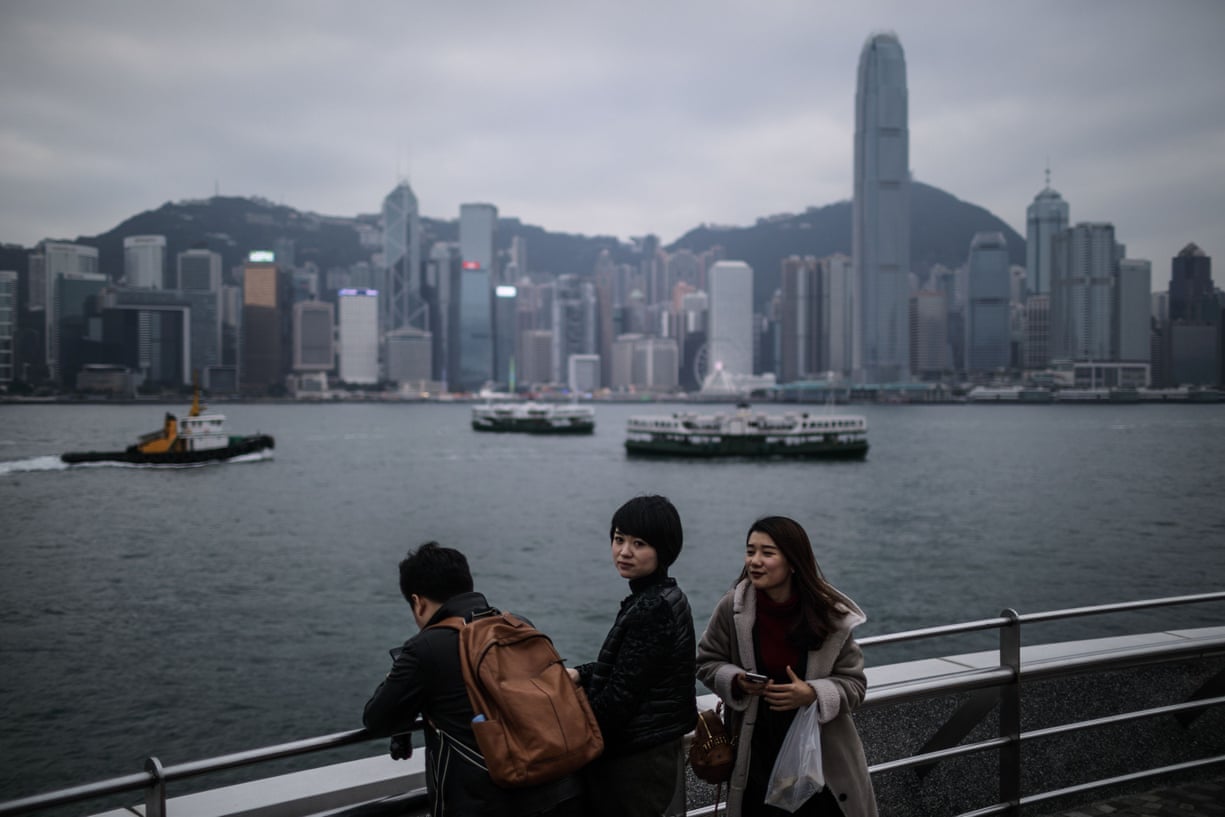 Independent bookstores, on the other hand, have been deserted by their former customers, and some have had to close down. One of them is 1908 Books, a bookstore in the Tsim Sha Tsui district that stocked only political books and magazines. It shut its doors earlier this year without any public announcement. In November, Page One, a large Singapore-owned bilingual chain that occasionally carried political books in Chinese, withdrew from Hong Kong entirely.

A handful of independent bookstores do survive, but they all belong to the “second-floor bookshops” category: operating from higher floors of commercial buildings and harder to find for visitors unfamiliar with Hong Kong. One example is People’s Coffee and Books, also located in Causeway Bay, which doubles as a cafe. It is still carrying all the troublesome volumes, but owner Paul Tang says it is seeing far fewer customers than at this time last year. And in an unexpected twist, the Causeway Bay Books outlet – still closed to the public – was purchased by a Chinese national.

One aim of the Southern Hill Project is to put pressure on tour guides: “The Tourism Bureau ensures that travellers bound for Hong Kong and Taiwan receive warnings and are subject to propaganda, and tour guides are given the responsibility to remind, discourage and prevent tourists from buying publications that are deemed politically harmful to bring back to China,” says Bao.

Deemed harmful … books banned on the Chinese mainland on sale in a Hong Kong market last February. Many such titles have now been withdrawn. Photograph: Kin Cheung/AP

The clampdown is not only affecting what bookstores can sell but the books that are now available to them, with fewer books being published in the first place. “The bookseller incident not only sets new boundaries but also reinforces the norm, which is to publish in journals instead of books,” says Edmund Cheng, an associate professor at Hong Kong Baptist University.

“The former’s audience is restricted to peers and students but matters a lot in academics’ livelihoods and in the ranking of universities. But in this way, academic publication’s usage in the public sphere is undermined. So authoritarian protocol and market logic work quite well together.”

It has been a slow shift away from freer days, as Cheng underlines: “The self-censorship started before the booksellers’ case: after the umbrella movement [the pro-democracy protests that began in September 2014], it was no longer easy to publish critical books written by academics,” he says. “Titles, in particular, can no longer carry certain words, like ‘social movement’. If you have those in your title, you are no longer invited to conferences, especially on the mainland.”

Timothy O’Leary, head of the school of humanities at Hong Kong University, confirms this: “The effect is more likely to be a slow undermining of willingness to publish in politically sensitive areas,” he says, as academics and writers alike shy away from potential trouble. 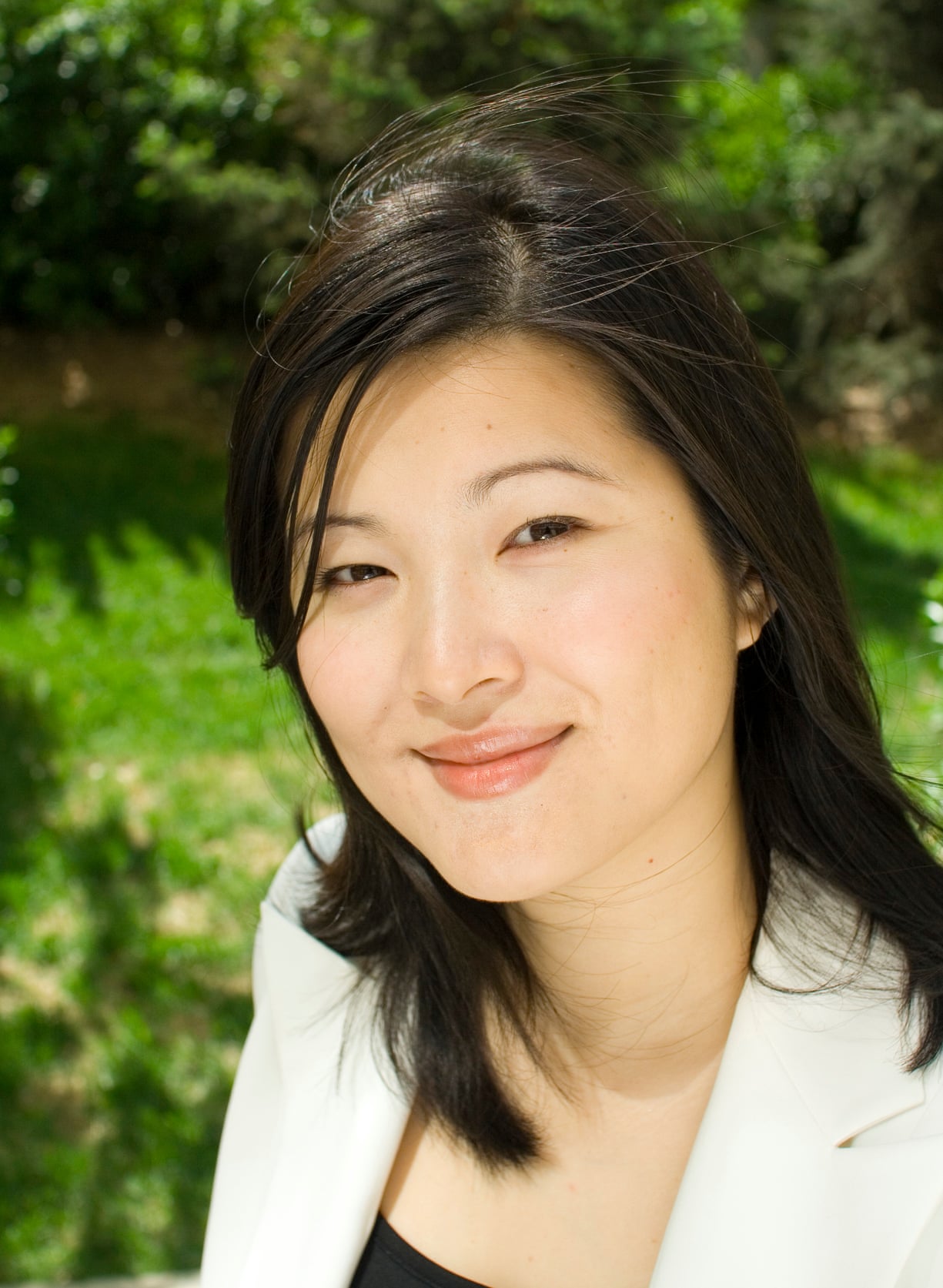 Even translators have become weary. Mei Fong, author of One Child: The Story Of China’s Most Radical Experiment, a book about the one-child policy and its consequences published in English this year, tried unsuccessfully to have her book distributed in Chinese.

“I wanted to reach the audience that has been most touched by the topic I analyse,” she says. But “after trying unsuccessfully to have the book published in China, I looked for a Hong Kong publisher, which is how books on ‘banned’ topics used to reach readers in the mainland. I was told that the problem with the book was not so much the sensitivities, but the difficulty in finding a distributor. Yet even before that, my translator pulled out,” she says. “So I commissioned my own translator, who asked to remain anonymous, but even then I could not find a publisher, neither in Hong Kong, because of the consequences of the five booksellers’ disappearance, nor in Taiwan, where books about China are not very popular.”

She decided to attempt a new approach, allowing the Chinese version of her book to be be downloaded for free, with the possibility of contributing a voluntary fee to cover costs. It’s not clear how long her experiment can last before the mainland censors pull the plug on her website.

“Everybody is scared,” says Renee Chiang, of New Century Press. “The printers … are not willing to print political books. And the bookshops are not willing to stock political books, because now it is considered dangerous. But since the majority of the readers of this kind of work are visitors from the mainland, now that the customs officers have increased their surveillance and confiscation of political books, they are no longer buying them. So at both ends of the chain we have problems.”

Given the climate in Hong Kong, printers do not see their refusal to print as a political decision, but purely a business one. AsiaOne, which used to print political books without worries, has ceased doing so – but nobody at the company agreed to be interviewed. Jason Chan, of printing company Sun-Design, says that “truly speaking, the booksellers’ case has a bad influence on the publishers and the booksellers still working in Hong Kong. I still believe that Hong Kong is a safe place to work, so I haven’t rejected any book’s printing yet because of political reasons. Nowadays, the volume of books printed is going down, but the impact has been [great] only on specific bookstores and publishers,” he says.

Authors, too, are feeling the pinch. Yu Jie, a mainland author of politically sensitive books, saw his contract for a new book on Xi with the publishers of Open Magazine – a monthly that tries to follow the party’s power struggles – rescinded after the chief editor, Jin Zhong, left Hong Kong under pressure from his family. The book was eventually published in Taiwan to a much smaller audience.

Meanwhile, given the prohibitive costs of keeping unsold stock, some publishers have resorted to pulping political books that had no chance of getting distributed.

According to the South China Morning Post, Hong Kong’s main English language paper, Sophie Choi – Lee Bo’s wife – ordered “45,000 books critical of the Communist party destroyed” in the hope of facilitating her husband’s release. Other publishers, too, have privately admitted to destroying political books that cannot be distributed and sold.

The damage done to the Hong Kong publishing industry is unprecedented. “Since 1949, Hong Kong had always been the place where books about China could be published. Its role was huge, way beyond the size of Hong Kong and its readership. This is why to this day scholars from China and from all over the world come to Hong Kong: to be able to see sensitive material,” says Bao. “This is now disappearing.”

Courtesy of  The Guardian